Encyclopaedia of scientific units, weights, and measures : their SI equivalences and origins 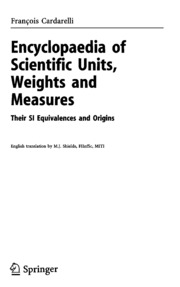 Encyclopaedia of scientific units, weights, and measures : their SI equivalences and origins

Mankind has a fascination with measurement. Down the centuries we have produced a plethora of incompatible and duplicatory systems for measuring everything from the width of an Egyptian pyramid to the concentration of radioactivity near a nuclear reactor and the value of the fine structure constant. With the introduction first of the metric system and of its successor the Système International d'Unités (SI), the scientific community has established a standard method of measurement based on only seven core units.

The ENCYCLOPAEDIA OF SCIENTIFIC UNITS, WEIGHTS AND MEASURES converts the huge variety of units from all over the world in every period of recorded history into units of the SI.

Featuring: * An A - Z of conversion tables for over 10,000 units of measurements. * Tables of the fundamental constants of nature with their units. * Listings of professional societies, and national standardization bodies for easy reference. * An extensive bibliography detailing further reading on the multifarious aspects of measurement and its units.

This huge work is simply a "must have" for any reference library frequented by scientists of any discipline or by those with historical interests in units of measurement such as archaeologists.

SOME PRAISE FOR THE PREVIOUS EDITION:

NEW SCIENTIST "If you tire of flicking through piles of textbooks looking for the formulas for converting noggins into litres or foot-pound-force per hour into megawatts, do not despair. Chuck out the lot and buy SCIENTIFIC UNIT CONVERSION by Francois Cardarelli which claims to contain every scientific unit ever used ... All weights, volumes, powers, areas, field strengths - you name it, it's here. A gem for engineers, scientists, historians, journalists ..."

CELLULAR AND MOLECULAR BIOLOGY "This is a really extraordinary book ... thanks to an excellent, judiciously condensed method of presentation, permits the conversion into metric units of any type of measure."